The Legend Of The Space Doge 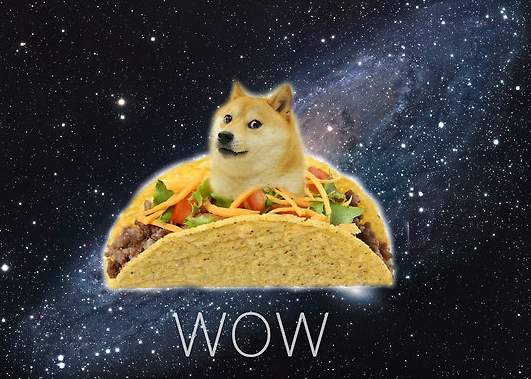 Once upon a time there was a very curious Doge, his name was Doge. Doge always liked the stars. Doge’s grandad was the first Doge to touch the moon. Doge wants to be like his grandad. So Doge saved up all his moola and bought a space taco. The only space taco the world has ever seen, and the most ADVANCED taconology the universe has.

When Doge was old enough he got a space taco license. Doge grabbed his space Taco, placed it on the ground, and flew away, thus breaking thru the atmosphere of the earth and flying away. “Space is so cool, it's very space, much amaze, and very wow.” “It’s more purple than the images I have seen.”

Just then the lettuce fell out of the space taco, then the cheese, and slowly the mince. He started falling out of the sky! “HELP” he barked “I'M FALLING!”. He was about to hit the ground, and he see’s his old grandpa hobble out onto the road bringing a trampoline and a mattress with him and placing under where Doge was about to hit and saved Doge’s life, resulting in an explosion of random text. Which is now the language of the Doge RACE.

Doge is 30 now he has a wife and kids, and cancer… The only way to cure his cancer is a space dust cookie. Only his kids know about what to do because of all the stories they have been told about their dads adventures. So they train for their licences, “YAY!” the three doges exclaimed, “We got our licenses!” Their Dad reminds them about the rules and how unsafe it is “We know dad” they sighed “we have our licenses now, we know what to do” Dad doge gives them a hug and sends them on their way to the launch pad that their dad used on his first mission.

The kids are gliding through space in their advanced flying house. “THERE!” they all said at once “There is the star to harvest dads space dust from” As they grow closer and alarm goes off “LOW FUEL ” Then they crashed into a star. It was very hot as they searched around looking for stardust. They found all kinds of dust and they all shouted "IT'S STARDUST" but which type does dad need…